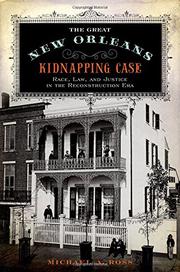 Race, Law, and Justice in the Reconstruction Era

by Michael A. Ross

A Reconstruction-era kidnapping incident in the Deep South gets put under the historical microscope.

Ross (History/Univ. of Maryland; Justice of Shattered Dreams: Samuel Freeman Miller and the Supreme Court during the Civil War Era, 2003) calls his legal nonfiction tale “a work of micro-history….It mines a single historical moment for insights into both the history of New Orleans and the Reconstruction era.” The author relates the now-obscure 1870 incident of the kidnapping of Mollie Digby, the young child of Irish immigrants Thomas and Bridgette Digby, and the subsequent trial of the two African-American kidnapping suspects, Creoles Ellen Follin and Louisa Murray. The event was to prove a watershed moment, however short-lived, in the 19th-century history of racial justice in the American Deep South. Ross also follows the fortunes of men like John Baptiste Jourdain, an African-American detective assigned to the Digby case, whose life would be significantly transformed forever by it. Ross’ historical work here is commendable, but what the book lacks is a sure-footed sense of dramatic pacing: The courtroom scenario that dominates the book is simply too long and drawn out, especially considering that the fate of Mollie Digby is made clear early on. Much of the book is centered on simply learning the motives for the kidnapping and whether Follin and Murray would be exonerated or found guilty by a multiracial New Orleans jury. Importantly though, Ross does show how the trial was used as a source of exploitation for anti-integrationist Southern politicians in the late 19th century who would later help usher in the nefarious Plessy v. Ferguson “separate but equal” laws. “Because all black people were now free,” writes the author, “newspaper editors warned readers to expect ever more horrific crimes committed by black individuals unless the perpetrators were found and incarcerated.”

Informative but often unwieldy history of a pivotal period for race relations in the American South.