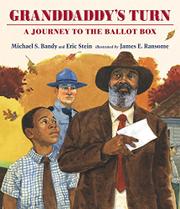 A Journey to the Ballot Box

In this touching picture book by the authors of White Water (2011), an African-American boy learns the importance of voting by accompanying his grandfather to a polling station.

Michael has learned the value of hard work from his chores on the farm and patience from the afternoons fishing with Granddaddy. When Granddaddy puts on his best suit, Michael knows it is a special day. His grandfather is voting for the first time! But when a deputy at the voting booth stops them, the joyous occasion becomes a lesson about racism and injustice. The story is subtle, skipping over the struggle required to achieve progress. Instead, the gentle “patience, son, patience” refrain implies justice will come as a matter of course if readers wait their turn. Coretta Scott King Award–winning illustrator Ransome captures the nuance that is left out of the text in his vibrant watercolor paintings. The Confederate flag flying over the polling station and the facial expressions of the white people there underscore the racialized context for sanitized statements like “some people were allowed to vote and some people were not.” The final page of historical information about voting rights in the South is a nice bonus.

This seemingly simple read-aloud to introduce young readers to the 50th anniversary of the Voting Rights Act achieves complexity in its images.