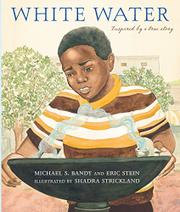 Young Michael’s desire for refreshment at the whites-only water fountain teaches him about truth and the power of imagination.

Narrator Michael normally accepts the familiar trappings of the Jim Crow South—giving up a seat at the bus stop and on the bus and drinking from separate water fountains. When Michael drinks from his assigned fountain, he finds the water warm and nasty. Next to him, a white boy drinks for a long time, convincing Michael that the white water is superior to his. Michael cannot stop thinking about that delicious white water and comes up with a way to taste it for himself. When reality hits—the same pipe feeds water to both fountains—Michael begins to wonder what other lies he has believed. Strickland’s watercolor-and-ink illustrations extend the story, visually demonstrating the similarities between these two boys. Michael’s grandmother and the white boy’s mother both hold their hand to their foreheads in the heat; the boys sit at the bench with their legs extended the same way; they leave the bus through different doors but their bodies move with the same motion; their drinking stances are identical. Inspirational in tone, this is a strong introduction for young listeners and readers to the American Civil Rights movement.

Michael’s examination of the myths that rule his world should inspire modern readers to do the same. (Picture book. 4-10)