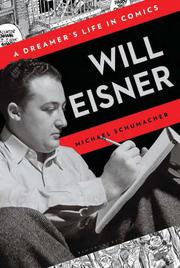 A Dreamer's Life in Comics

This biography of visionary pioneer Will Eisner (1917–2005) also includes a compact history of the progression from comic books to graphic novels.

Though Eisner’s 1940s hero, The Spirit, never achieved as much subsequent mainstream cultural currency as Superman or Batman, no comics artist has been more influential or prophetic. Even before the great comics scare of the ’50s, during which the medium was widely condemned as a corrupting influence on the nation’s youth, Eisner proclaimed his intentions: “Comics—sequential art—is my medium. I regard it as much my singular medium as a writer who writes only words or the motion-picture man who writes only in movies…it has perimeters and it has parameters; it has grammar; it has distinct rules; it has limitations; and it has possibilities which have not really been touched.” Eisner lived to not only see his manifesto fulfilled by a new generation of “underground” artists, but he was inspired by their popularity to create the most conceptually ambitious work of his career, following a hiatus of a couple of decades. Schumacher (Wreck of the Carl D.: A True Story of Loss, Survival, and Rescue at Sea, 2008, etc.) draws heavily from other sources for a competent detailing of his emergence into the profession, yet the book really comes alive when it advances to his artistic resurrection, through interviews with many of those inspired by Eisner and critical commentary that demonstrates Schumacher’s intense passion for, and deep knowledge of, his subject. “His work was his therapy,” writes the author of the death of Eisner’s teenage daughter, “and later, when the time was right, he would creatively combine his work and grief into a sequential art form that would help change the direction of comics.”

Engaging for both the curious and the ardent fan.