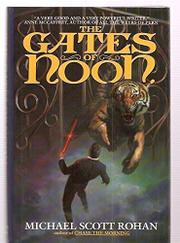 THE GATES OF NOON

Sequel to Chase the Morning (not seen): a strange, hectic fantasy with an exotic Far East setting and more weird beasties than you can shake a stick at. Corporate fixer Steve Fisher has won a contract to supply computers and know-how to help redevelop the collapsing water-based economy of the Indonesian island of Bali; he is also a mighty warrior in a magic universe composed of a stable Core and a highly magical Spiral. Now, two powerful entities are lining up to prevent him from delivering the cargo: the ancient, silver-tongued tiger- god, Barong, and the seductive death-goddess Rangdu. On Steve's side are an odd old Dutchman, Ape (he turns out to be Hunaman, the monkey god), and skeptical blond Eurasian Jacquie, an ex whom Steve treated poorly in the past. A furious, well-orchestrated, often eye-popping series of battles and scenarios commences, during which Steve makes the transition between avaricious corporate dolt and thoughtful, ecologically correct maturity—and wins back the lovely Jacquie, too, of course. Finally, Ape will intervene to offer the new, improved Steve the opportunity to determine the fate of the island and its culture. Hard-working and different, with tons of local color, bustle, and noise: sometimes humidly suffocating, equally often dazzling.