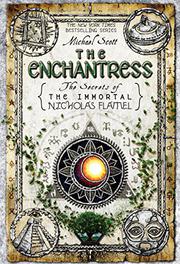 From the Secrets of the Immortal Nicholas Flamel series, volume 5

Multiple plotlines—some of which, thanks to time travel, feature the same characters and even figures killed off in previous episodes—come to simultaneous heads in a whirl of short chapters. Flamel and allies (including Prometheus and Billy the Kid) defend modern San Francisco from a motley host of mythological baddies. Meanwhile, in ancient Danu Talis (aka Atlantis), Josh and Sophie are being swept into a play to bring certain Elders to power as the city’s downtrodden “humani” population rises up behind Virginia Dare, the repentant John Dee and other Immortals and Elders. The cast never seems unwieldy despite its size, the pacing never lets up, and the individual set pieces are fine mixtures of sudden action, heroic badinage and cliffhanger cutoffs. As a whole, though, the tale collapses under its own weight as the San Francisco subplots turn out to be no more than an irrelevant sideshow, and climactic conflicts take place on an island that is somehow both a historical, physical place and a higher reality from which Earth and other “shadowrealms” are spun off.

Much rousing sturm und drang, though what’s left after the dust settles is a heap of glittering but disparate good parts rather than a cohesive whole.