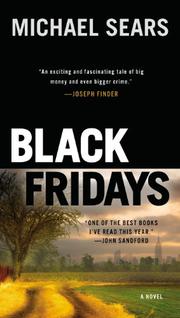 First-time author Sears does the near impossible in this high-finance thriller: He turns a Wall Street executive who’s just served jail time for fudging figures into a sympathetic character.

Fresh from two years in jail, disgraced executive Jason Stafford lands a new job in record time: He’s called in to tidy up records that were left in disarray after junior trader Brian Sanders died in an apparent boating accident. It doesn’t take long to figure out that the death wasn’t accidental, especially after Stafford discovers that Sanders was into kinky sex and high-stakes gambling. The trail leads Sanders through the Wall Street world he once frequented and leads to a colorful FBI showdown. A former Paine Webber executive himself, Sears peppers the story with insider details, and his portrayal of Wall Street tensions and rivalries is convincing. The murder plot is turned capably enough, though most avid mystery readers should be able to guess the outcome. But the book’s other story, that of Stafford’s rehabilitation, proves the more compelling one. The character is flawed but appealing (and making him a Deadhead was a nice touch), knowing he created the mess that he’s picking up. That includes a failed marriage to Angie, an alcoholic former model, who’s returned to her home in rural Louisiana and now has a second husband who’s prone to violence. Jason and Angie also have a severely autistic son, and the details of his condition also have the ring of truth.

Jason’s attempts to reach his son—and to rescue him from his ex-wife’s new partner—provide the book’s strongest scenes and the key to Jason’s redemption.