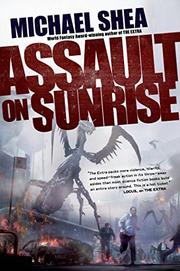 Second of a trilogy begun with The Extra (2010), a near-future dystopia in which “extras” are cannon fodder in live-action movies.

Much of Los Angeles has degenerated into a horrific ghetto known as the Zoo, whose inhabitants will do almost anything to escape. Big-shot movie director and coldblooded psychopath Val Margolian has developed Anti-Personnel Properties, mechanical killing machines, to hunt, battle and devour the extras. The extras that survived Margolian’s last box-office smash are now rich and have taken up residence in Sunrise, a thriving, idyllic small town populated by hearty can-do types who know how to take care of themselves. Margolian's big new idea, born partly of artistic vision and partly from a desire for revenge, involves tricking the Sunrisers into killing some cops. Once the town is found guilty of “corporate homicide,” it’s turned over to Margolian and his APPs to execute the death sentence. So ex-extras Curtis, Japh and Jool stand alongside Sunrise natives sent from central casting to battle mechanical wasps, mantises and other unpleasant surprises. Shea brings in a few fresh details to this otherwise vacuously predictable enterprise. One battle scene blends into the next. It gives nothing away to point out that there’s never a question about who will win.

Despite the endless gore, the action is curiously bloodless. As an exercise in which money does most of the talking, it’s almost as cynical as its premise. In the end, marginally more intriguing than watching paint dry.