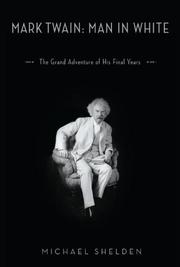 The Grand Adventure of His Final Years

A portrait of Mark Twain’s final years offers some revisionist history but overloads a potentially compelling narrative with anecdotal minutiae.

With April 21, 2010, marking the centennial of the death of perhaps America’s most celebrated novelist, biographers will be aiming to shine new light on corners of that oft-explored life. Former Baltimore Sun fiction critic Shelden (English/Indiana State Univ.; Graham Greene: The Enemy Within, 1994, etc.) stakes his claim on the author’s final three-and-a-half years, a period during which he was in self-proclaimed “retirement” and had previously suffered his way through great tragedies, the death of his wife and young daughter and the collapse of his finances. Yet this is also the period in which Twain developed the persona that remains indelible in the public’s consciousness: the showman in the white suit, which he debuted at a Library of Congress copyright hearing less than four years before his death, and which Shelden milks for all it is worth (and more). Twain’s final years have often been perceived as dark and bitter, yet Shelden maintains he “was also funnier and a lot happier than later generations of critics and biographers have been willing to admit.” The attempt to sustain that theme runs counter to the more riveting plot that is in the margins through much of the book but moves center stage toward the end—the power struggle between Twain’s daughters and his secretary, who assumed much of the responsibility formerly handled by his wife, who may have had romantic designs on him and who ultimately conspired with, and married, his business advisor to try to take control of his fortune. Unfortunately, Shelden devotes too many pages to Twain’s honorary Oxford doctorate, trips to Bermuda, a bungled burglary, the singing career of his daughter and encounters between “the most famous, and the most beloved, person in America” with other famous folk, many of whom Twain neither knew well nor liked much.

Too little light shed on Twain’s work and legacy.