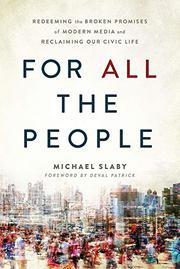 FOR ALL THE PEOPLE

A former Obama strategist reflects on the state of modern media.

In the book’s introduction, former Massachusetts Gov. Deval Patrick describes Slaby as “one of the geniuses behind” President Barack Obama’s “then-revolutionary digital [campaign] strategy.” As the Obama campaign’s deputy digital director in 2008 and chief integration and innovation officer in 2012, Slaby oversaw “dozens of digital firsts” by a presidential candidate, including the first Facebook and Twitter accounts. Slaby, at the forefront of digital politics, is uniquely positioned to provide insights into the shifting landscape of media in the 21st century, which not only propelled Obama into office, but also spawned the tea party movement, exacerbated political divisions, and facilitated the mass dissemination of disinformation. Combining erudite analyses of social theories, such as Jurgen Habermas’ notion of the public sphere, with an accessible, occasionally witty, writing style, the author emphasizes the major paradox of today’s media systems and technologies that “are ostensibly meant to connect us” yet excel at providing “increasingly isolated sets of information.” After providing a convincing narrative on “Broken Promises” of modern media, where “popularity masquerades as credibility, and credibility seems like a function of little more than repetition,” the second half of the book provides practical solutions to reform both the media we consume as well as American civic life in general. A protégé of Obama, Slaby is relentlessly optimistic even while acknowledging the contemporary cesspool of new media platforms and the failures of traditional media outlets, and the book successfully blends sophisticated analysis with an uplifting, engaging message. Though some may question the author’s confidence in the general public’s ability to discern fact from fiction, they will still find plenty of pragmatic solutions.

A well-written commentary on one of the most pressing social issues of our time.