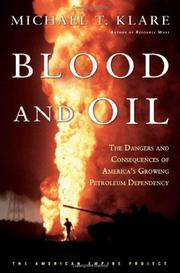 The Dangers and Consequences of America’s Growing Petroleum Dependency

Forget clashes of civilizations and ideologies—the real war is about natural resources.

“In Angola and Sierra Leone,” national-security scholar Klare (Rogue States and Nuclear Outlaws, 1995) writes, “it was control of the diamond fields that sustained the bloodshed for so long; in the Congo, gold and copper; in Borneo and Cambodia, timber.” And now, in many parts of the world, the battle is over oil, a conflict that is reshaping American policy across the spectrum, such that “the U.S. military is being converted into a global oil-protection service” and much diplomatic effort is now invested in “securitizing” oil and wooing its producers into our camp. The outlines of that battle are only now taking shape; yet, Klare argues, what is certain is that the US is becoming ever more dependent on foreign sources of oil, “and thus increasingly vulnerable to the violence and disorder that accompanies oil production in politically unstable and often hostile producers.” Slightly more than half of the domestic oil demand in 2000, for instance, was met with foreign product; by 2025, that figure is expected to rise to 67.9 percent, or nearly 20 million barrels per day. Satisfying these needs will introduce conflict into regions whose rulers may tolerate us but whose people do not; this is true of the Persian Gulf, Klare notes, and may also be true of the so-called Alternative Eight, nations such as Mexico, Colombia, and Nigeria whose political futures are anything but certain, even if they “were to squeeze out such prodigious oil surpluses in the years ahead that they lived up to the sunny predictions of American policy makers.” More likely they will not, Klare suggests, which makes it ever more imperative that the US develop alternative sources of energy and “a comprehensive blueprint for the postpetroleum era” but quick. Instead we have Cheney and company’s “dangerous and deluded plan for more of the same”: more conflict, more dependency, more blood for oil.

A persuasive argument and most timely case for coming up with another approach—now.