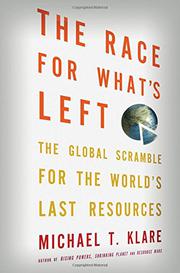 THE RACE FOR WHAT'S LEFT

The Global Scramble for the World's Last Resources

Though empires and countries have always harvested the resources necessary for their survival, writes Nation defense correspondent Klare (Peace and World Security Studies/Hampshire Coll.; Rising Powers, Shrinking Planet: The New Geopolitics of Energy, 2008, etc.), the world now faces an unprecedented combination of factors, a perfect storm made up of “a lack of any unexplored resource preserves beyond those now being eyed for development; the sudden emergence of rapacious new consumers; technical and environmental limitations on the exploitation of new deposits; and the devastating effects of climate change.” The author touches on the discovery of the mammoth deposits of oil, copper, gold, natural gas and other key minerals made after World War II, which fueled prosperity for decades. However, in 2011 many of these commodities have passed their peak, and corporations and governments must now venture into “previously inaccessible or inhospitable areas.” Klare deftly describes the complex and questionable methods required for acquiring these resources, including deep offshore drilling and hydraulic fracturing (“fracking”). The author devotes one chapter to the “land-buying sprees” now occurring around the globe. Saudi Arabia, China, South Korea and the United States are buying up land in other countries in order to secure a stable food supply for their citizens—often at the expense of the supplying country. In Ethiopia, plots of land owned by Saudi Arabia have become “high-tech plantations set in the middle of a country where farming is still conducted with sickles and ox-drawn plows, and where millions suffer from chronic malnutrition.”

Though occasionally repetitive, the book is a provocative, important addition to the literature of resource issues.