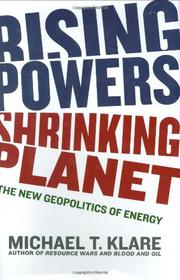 The New Geopolitics of Energy

A cheerless prognostication of a future driven by energy-acquisition battles that will prove especially gloomy for those who think that the price of gas is already too high.

It has long been observed that the wars of the 21st century will be about such things as oil and water. The Nation defense analyst and national-security specialist Klare (Blood and Oil: The Dangers and Consequences of America’s Growing Dependency on Imported Oil, 2004, etc.) is well positioned to write about such things. At the outset, he establishes a matter-of-fact tone that assumes the worst, at least if you’re a neocon: The United States was supposed to be the world’s one superpower after the Cold War ended, but at the moment Russia and China are rising rapidly, the former because of its vast energy holdings and potential, the latter because it has so much American money as a result of a staggering trade imbalance. The United States is thus not among the “nations that wield disproportionate power in the international system by virtue of their superior energy reserves,” even if the continued occupation of Iraq may one day give an advantage to U.S. energy companies. Energy is its own politics: For all the sword-waving and name-calling, the Venezuela of Hugo Chávez still supplies ten percent of America’s imported oil; the Darfur tragedy is ongoing precisely because Sudan has energy reserves and enjoys the diplomatic patronage of its chief customer for oil, China; the dictatorship of Kazakhstan is golden because it has so much oil, with Dick Cheney praising its government for “impressive political development” despite having rigged the last few elections and forbidden opposition. Klare urges several policy changes at the national and international level, including not just the expected call for increased efficiencies and the development of renewable energy, but also the formulation of new consortia: an alliance of Japan and China for the peaceful development of gas fields in the South China Sea.

A useful survey for students of energy, geopolitics and realpolitik.