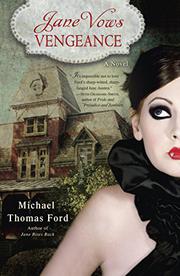 For one thing, Walter doesn’t even know that upstate New York bookseller Jane Fairfax is really an undead world-famous author. For another, his mother, Miriam Ellenberg, does know—and she’s a vampire hunter. Jane, who hasn’t even made it official with Walter, has only four more months to become pregnant before Miriam will go after her. And now Walter has decided it would be a nice idea to tie the knot during a European tour with members of the International Association of Historic Preservationists, along with Jane’s best friend Lucy, her rabbinical beau Ben Cohen and of course Miriam. There follows a whirlwind tour of important buildings in England, Ireland, Scotland, France, Italy and Switzerland, punctuated by a murder for which Jane is the most likely suspect, a wedding ceremony that’s interrupted by Jane’s 200-year-old first husband and a great deal of chatter more waspish than witty. Will Jane ever find Crispin’s Needle, which allegedly has the power to turn vampires back into ordinary humans? If she does, will she give up her bloodsucking ways for Walter? Can she defeat her vampire nemesis Charlotte Brontë? And when will she vow vengeance?

Fans will doubtless come running. But the dutiful cook’s tour of stately buildings and the joyless whodunit conventions combine to make this the most earthbound installment of the trilogy, even though it keeps jumping the shark.