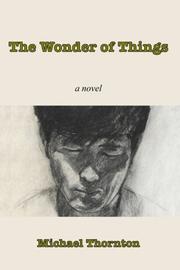 THE WONDER OF THINGS

A sorrowful man recalls the evolution of an intimate friendship in this novel.

While attending university in Kyoto, Thornton’s (The Fable of the Wen, 2016, etc.) unnamed narrator occupies a corner room in the home of a “humorless and opinionated” woman and her family. The only other renter is a young student whose nearly imperceptible comings and goings make him a ghostly presence. The painfully shy narrator forgets to mind his stove one evening and awakens to find his fellow renter extinguishing the appliance and opening his windows to clear out the smoke. Intrigued by his neighbor’s startling beauty, and desiring companionship, the narrator strikes up a conversation. The pair bond over the narrator’s prized possession—an antique urn adorned with a serpentine dragon—and its lore. The narrator begins to crave the attention of the man whom he only addressed by the honorific “Sempai,” joining him for meals and concocting new ways to be involved in his life. Soon enough, they share “a private world, filled with a storybook directness.” The narrator finds himself jealous when they spend time apart and disappointed by Sempai’s seeming indifference to his presence. At times, the narrator feels the need to protect Sempai—a gentle, compassionate soul who even feels for the monsters in fairy tales. After returning from a summer trip to his hometown, the narrator finds Sempai even more introspective than before—a plight that the narrator tries to unravel. Thornton’s thoughtful novel acutely portrays the experience of an obsessive friendship, and the narrator’s earnest yearning for attention feels profoundly relatable. However, the text, while sophisticated and beautifully descriptive, occasionally verges on verbose. A few early passages, such as a description of the narrator’s creation of a haiku about using the bathroom, have a playfulness that doesn’t align with the text’s later gravitas. The slow pace of the plot and the narrator’s mournful self-reflections make for a heartfelt read, and it has a sorrow that’s almost tangible. Readers with a rudimentary understanding of Japanese culture will find it useful to understand some cultural references.

A heartbreaking examination of friendship, family, and the surprising roles that people can play in one’s life.

AFTER DARK
by Haruki Murakami
Fiction

A TALE FOR THE TIME BEING
by Ruth Ozeki
Children