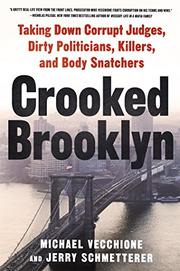 An unadorned memoir of prosecuting political corruption in Brooklyn.

Writing with journalist Schmetterer, Vecchione (co-author: Friends of the Family: The Inside Story of the Mafia Cops Case, 2009) takes a straightforward approach to examining his career with the Brooklyn District Attorney’s Rackets Division, which he helmed from 2001 to 2013. In the prologue, he recalls his excitement at crime scenes as a neophyte in 1973: “I was hooked. This was the life for me.” Although the Rackets Division prosecuted many crimes as part of "the largest urban prosecution agency in the country,” in 2002, Vecchione began pursuing a cabal of judges who were soliciting bribes to fix cases, as well as the state politicians who appointed them. The initial convictions "struck Court Street like an earthquake" and led to wiretaps and indictments of powerful players, including Judge Gerald Garson and Democratic Party official Clarence Norman. “We felt that Garson was a product of machine politics in Brooklyn,” writes the author. Much of the narrative focuses on this labyrinthine case, as Vecchione details the nitty-gritty of proving such urban political scandals. Unsurprisingly, the reverberations in political circles were huge: "For a while,” he writes, “I was a pariah." Yet other officials quietly aided him, and the author emphasizes the arrogance of his targets, who turned down generous plea offers. In episodic chapters, Vecchione discusses other dramatic cases his division worked simultaneously, ranging from the NYPD’s notorious “Mafia cops,” who moonlighted as hit men, to a ghoulish crew that plundered bodies from funeral homes. Since the author identifies actual cases and malefactors, this career memoir benefits from a gritty verisimilitude. However, the author’s focus on courtroom maneuvering and investigative procedures can become tedious without greater context regarding New York’s labyrinthine government and history of corruption.

A useful primer on the enduring nature of political machines and the slippery qualities of power.