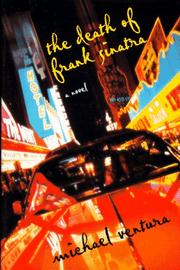 THE DEATH OF FRANK SINATRA

Ventura's typically overwrought prose (The Zoo Where You're Fed to God, 1994, etc.) here competes with the recent spate of films about the same subject—that modern-day Babylon in the desert, Las Vegas. As usual, Ventura overlays lots of gonzo theology and cool-guy posturing on a plot that doesn't live up to its noir pretenses. Mike Rose—short for Rossellini—is a true child of Vegas, the son of a showgirl and a gangster. A private investigator in his 40s, Rose knows where the bodies are buried. After all, his pop (``Eddie Maybe'') was a hit-man who went bonkers after participating in the biggest hit of his career—the cleanup to the Kennedy assassination, a job that led to his own disappearance. Rose can keep a secret, even though his mentally disturbed brother, Alvi, can't—he blames their strange family history, including some old porno made by his mother, for his own odd behavior. It's Alvi's loose talk, overheard on one of his brief stays at home from the loony bin, that leads to Rose's current mess. It turns out that the family's best friend, another gangster named Zig, saw to Eddie Maybe's demise, an act for which he hopes to atone by arranging his own death at Rose's hand. The current mob boss, Gino Lampedusa, wants Rose and his brother eliminated, but so does another character who seems to come from left field, a computer entrepreneur whose wife has hired Rose to hide a stolen disk. For all its complications, the plot doesn't add up to much; it's mostly an excuse for Ventura to indulge his ideas about the Vegas mythos (with Sinatra as godhead) and to rue the waning of the old days, symbolized by the Dunes being torn down. Ventura punctuates his narrative with lots of gangster how- to's and some tiresome conspiracy riffs, none of which compensates for a sluggish story.