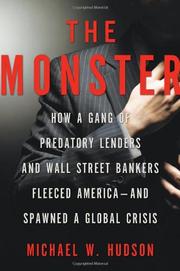 Another look at the subprime mortgage lending meltdown, with a focus on the predatory housing finance corporation Ameriquest and the once-venerable Wall Street firm of Lehman Brothers.

Formerly a staff reporter for the Wall Street Journal, Hudson (editor: Merchants of Misery: How Corporate America Profits from Poverty, 1996) is now a senior investigator at the Center for Responsible Lending. Recent books about the global financial meltdowns have designated a variety of villains. Roland Arnall (1939–2008), founder of Ameriquest, has appeared in many of those previous books, but Hudson makes him the center of his narrative. The immigrant son of a Czech mother and a Romanian father, the boy settled in Los Angeles and became a real-estate developer before entering the mortgage-loan business. In Hudson’s eyes, Arnall always lacked a moral compass. He obsessed about hiring as many young salesmen as possible who would lie to potential customers and forge documents if it meant bringing a new mortgage into the portfolio. The consumers must share the blame because they signed papers they failed to understand, but that was part of Arnall’s plan—prey on poorly educated marks, many of them minorities and widows, starting in Orange County, Calif., and working outward from there. The insanely profitable business became more profitable still after the entry of Wall Street investment bankers such as Lehman Brothers, which could package the financially unsound mortgage loans and sell them to greedy investors. Hudson does a workmanlike job unfolding Arnall’s biography, though the facts about his business tactics, personal life and emotions never quite solve the puzzle of how he slept at night, given the huge numbers of lives he ruined as the marks lost their homes. The saga is doubly depressing because Arnall hired from a seemingly endless supply of amoral salesmen and managers. Hudson is a master of context, supplying the pre-1990s history within the mortgage-lending business, Wall Street and the government-regulation realm.