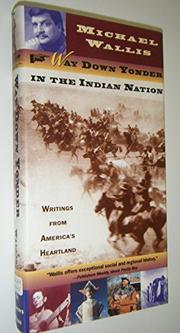 WAY DOWN YONDER IN THE INDIAN NATION

A broader view of the ground Wallis covered in Oil Man (1988) and Pretty Boy (1992): the history and lore of Oklahoma and its inhabitants, from the earliest days to the present. One of Wallis's strong suits is his ability to convey the collision between Oklahoma's frontier origins and its role in the modern world. There's plenty of solid material here: Topics run the gamut from the rowdy 1889 land rush to the quiet modern influx of Mennonite farmers; from a visit to the sleepy panhandle town of Texoma to a survey of Tulsa's numerous art-deco buildings. The author is at his best in affectionate sketches of such Oklahoma originals as maverick football-star Joe Don Looney, Cherokee Chief Wilma Mankiller, and cowboy Jim Jordan. Most of the chapters originally appeared as magazine pieces (in Oklahoma Today, American West, etc.), and three are reprinted from the author's previous books—so the approach is inconsistent from one chapter to the next. Some, such as the one on the ``Thunderbirds,'' the 45th Infantry Division of WW II, effectively combine history, personal observation, and color, but others, such as a guide to popular barbecue joints, are puff pieces of little lasting value—especially since there's no evidence that the article has been revised or updated in the 11 years since its magazine appearance. And while Wallis's upbeat attitude and aggressively folksy style are probably perfect for Oklahoma Today, they don't wear well at book length. Well-researched and sympathetic view of the American heartland—but best read the way it was originally written, in chapter-size bites.