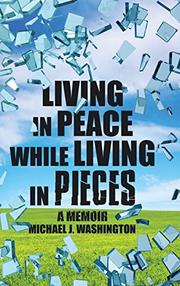 A plainspoken memoir by an American ex-soldier, meteorologist, father, and recovering addict who overcomes challenges and gains insights while on a quest to find inner peace.

In his debut, Washington works to weave his varied experiences into a statement of his personal philosophy, which is made clear in the first line: “I believe the foundation of peace is having a positive outlook on life.” The rest of this short but comprehensive work explores Washington’s efforts to practice this positivity throughout the ups and downs of his life, from childhood to the present. His military service, his career in meteorology, his Christian faith, and his times spent in New York City and St. Louis all play important parts in the story. But these all pale in comparison to the two most engaging segments: an account of Washington’s relationship with his son, and another about his struggle with crack cocaine. The former is an emotional story of the author’s growth from a boy, who becomes a father at 17, to a man, who’s been made wise by tragedy. The latter is a strong, if more conventionally told, addiction memoir that brims with honesty; it also makes a narrative digression, briefly telling the author’s tale from his wife’s point of view, which comes as a welcome breath of fresh air. Readers may wish that Washington had explored these portions of his life in greater depth and cut back on many of the others. Doing so might have helped to correct the book’s most frustrating flaw: a confusing structure that proceeds according to theme—such as “childhood,” “faith,” and “the Navy”—with little regard to when individual events happened, which causes the reader’s sense of time to blur. The chapter about Washington’s son, for example, comes relatively early in the memoir, but it covers a 20-year span that the author repeatedly re-examines over the course of the rest of the book. Even within chapters, the narration leaps around in a way that it makes it difficult to place events in order. In its best moments, however, Washington offers a compelling read about his darkest struggles.

An earnest but disorganized remembrance.

THE NIGHT OF THE GUN
by David Carr
Newsletter sign-up