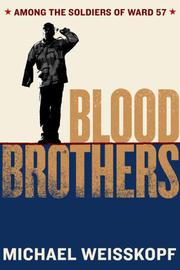 Among the Soldiers of Ward 57

Stark, candid memoir by a Time correspondent severely injured while covering the war in Iraq.

A hand grenade tossed into the back of his Humvee turned Weisskopf into a casualty of war. Flinging the explosive out of the vehicle, he lost his right hand and embarked on the odyssey toward his recovery, searingly chronicled in these pages. With high-level help, Weisskopf ended up at the Walter Reed Army Medical Center’s Ward 57 for amputees. There, he found himself uncomfortably trapped between his journalistic detachment and some who wanted to put him on center stage, hailing him for saving others in the attack. He struggled with rehab and with the injury’s impact on his career. This may not be an easy story to read, but it is only one story among many, he reminds us. Describing the backgrounds and experiences of three soldiers also in Ward 57, juxtaposing the similar paths to recovery followed by each man, the author finds other voices and fresh perspectives. Weisskopf was the odd man out in this group: much older, a civilian, a journalist. Haunted by the uncertainty of his actions on that fateful day, he delivers a work of fluctuating tone—sometimes clinical, sometimes cynical, sometimes critical. The real heroes, Weisskopf would have it, are the medical staff, the soldiers convalescing alongside him and the friends and family members who support them all. The journalist has a job to do here, and he does it well. Ward 57 becomes a metaphor for the horrors of war and the triumph of the human will.

An unflinching depiction of the aftermath of war and of the spirit of those who live through it.