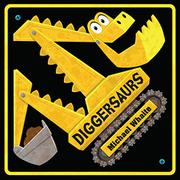 Less ambitious than Chris Gall’s widely known Dinotrux (2009) and sequels, this British import systematically relegates each dinosaur/construction-equipment hybrid to its most logical job.

The title figures are introduced as bigger than both diggers and dinosaurs, and rhyming text and two construction-helmeted kids show just what these creatures are capable of. Each diggersaur has a specific job to do and a distinct sound effect. The dozersaurus moves rocks with a “SCRAAAAPE!!!” while the rollersaurus flattens lumps with a cheery “TOOT TOOT!!” Each diggersaur is numbered, with 12 in all, allowing this to be a counting book on the sly. As the diggersaurs (not all of which dig) perform jobs that regular construction equipment can do, albeit on a larger scale, there is no particular reason why any of them should have dinosaurlike looks other than just ’cause. Peppy computer art tries valiantly to attract attention away from the singularly unoriginal text. “Diggersaurs dig with bites so BIG, / each SCOOP creates a crater. // They’re TOUGH and STRONG / with necks so long— / they’re super EXCAVATORS!” Far more interesting are the two human characters, a white girl and a black boy, that flit about the pictures offering commentary and action. Much of the fun of the book can be found in trying to spot them on every two-page spread.

Count on construction die-hards falling in love, but discerning readers would be wise to look elsewhere for their dino/construction kicks.