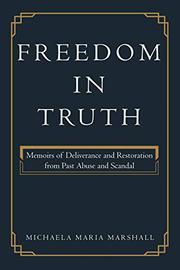 Memoirs of Deliverance and Restoration From Past Abuse and Scandal
by Michaela Maria Marshall
BUY NOW FROM
AMAZON
BARNES & NOBLE
LOCAL BOOKSELLER
GET WEEKLY BOOK RECOMMENDATIONS:

A debut memoir recounts the shocking cycle of sexual, physical, and emotional abuse a woman suffers as a young child and details her road to recovery.

Marshall’s early childhood abuse was so extensive that she buried the memories of it for many years: “Skeletons in my past include rape, incest, physical abuse, murder, scandal.” Not until her late 20s did the author begin having “back flashes of past sexual abuse.” While working with a therapist on her anxiety and depression, she recalled being raped when she was 3 years old by John, a neighborhood boy. She also became ensnared in doctor-nurse games with her older brother and a couple of his friends. Referring to herself as “Victim,” she remembers “the first time…between just her and Brother,” who told her his penis wouldn’t hurt her. Decades after the fact, she recalled a murder. Her maternal grandfather, who the family knew was a pedophile, hit her brother’s friend with a garden tool during a fight. The friend had stopped the older man from raping his sister. According to the author, her mother and brother, both of whom had been sexually molested by Marshall’s grandfather, actively participated in the crime’s coverup. Her mother told her father: “I’m not letting” him “go to jail.” Although both parents “physically abused” Marshall with beatings, her mother “didn’t need a reason to strike.” A section of “recovery Scriptures” that helped the author is included in the engrossing book along with forgiveness letters she addressed to everyone involved, including herself and God. Readers will quickly realize that Marshall, who is deeply religious, perceives the world within the confines of her Christian faith. At times, this view approaches proselytizing, as when she writes of her father, who was adopted, that she was “grateful his biological parents” didn’t abort him. Still, while therapy helped her recall the mistreatment she endured, the author deftly shows that her religious convictions enabled her to put her demons to rest through forgiveness of herself and her assailants. This is a moving story of abuse, homicide, and deceit that is most likely to strike a responsive chord among Christian believers.

A haunting tale of molestation, murder, and the power of faith that will appeal to Christian readers.