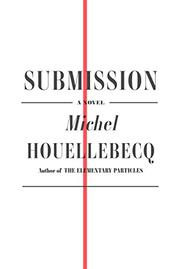 Houellebecq’s (The Map and the Territory, 2012, etc.) newest antihero is a literature professor whose specialty is a writer few Americans and not so many modern French readers know: the pseudonymous J.-K. Huysmans, who wrote the definitive decadent novel, Au rebours, way back in the pre-Proustian, post-impressionist day. That Huysmans turns up less than a dozen words into the narrative is an important cue, for François is decadent, too, in the same sense that an overripe cantaloupe is, sliding irreversibly into decay and rot. So are the careerist academics around him, and so are his students, the females among whom he gladly sleeps with when he’s not filling his eyes with pornography. Houellebecq’s book was implicated in the Charlie Hebdo murders of Jan. 7, the day it was published in France, as an insult to Islam, and indeed Houellebecq paints with the widest brush: in order to fend off a challenge from the right, France’s ruling Socialist Party comes to an accommodation with a strict Islamist political faction that accordingly rises to power and immediately fires all professors who aren’t Muslim and fundamentally inclined—but rewards converts with multiple veiled wives and salaries triple what the generous French welfare state had already been paying. Adieu Huysmans, bienvenu Al-Fatiha. Houellebecq isn’t patently anti-Islamic so much as anti-everyone, a fierce moralist of an Orwellian bent—and this book shares more than a few points with Nineteen Eighty-Four—who finds us all wanting. About the only morally clean character in the book is forced out early on: “But what am I going to do in Israel?” she asks. “I don’t speak a word of Hebrew. France is my country.” Not anymore, Houellebecq seems to be saying, because of our softness, complacency, and the usual venalities.

True, it won’t make ISIS’s holiday reading list, and it will offend cultural-relativist pieties. Still, though clunky and obvious, it’s well worth reading as a modern work of littérature engagée.