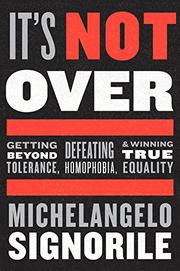 Getting Beyond Tolerance, Defeating Homophobia, and Winning True Equality

The noted outspoken gay journalist and radio host passionately appeals to the gay community to resist complacency in the struggle for equality.

In a thought-provoking call to arms, Signorile (Hitting Hard: Michelangelo Signorile on George W. Bush, Mary Cheney, Gay Marriage, Tom Cruise, the Christian Right and Sexual Hypocrisy in America, 2005, etc.) masterfully combines quotations and interviews from his satellite radio show with historical facts from the ever evolving gay rights movement to reiterate the “disconnect between the way we talk about the strides forward and the reality on the ground.” As revolutionary as the advancements in LGBT equality may appear, much work remains. Anti-gay violence, vicious schoolyard bullying, transphobia, Hollywood “gatekeep[ing],” and widespread discrimination in the name of religion are still occurring at alarming rates. The author surveys an impressive variety of contentious incidents (many already addressed on his radio program) ranging from the controversial, “morally complex” resignation of anti-gay Mozilla CEO Brendan Eich to extreme cases of homophobic bigotry, industry double standards, and hate crimes. Though it’s crystal clear whose side he’s on, Signorile fair-mindedly contrasts his pro-gay stance with contradicting conservative political and religious-leaning perspectives, and he points out the inherent flaws in their dictums. He severely criticizes the Republican Party for enacting widespread legislation based on the doctrine of “religious liberties.” By rebranding their backlash against marriage equality, the author shows how it directly threatens the freedoms of the LGBT community. Furthermore, he writes, this type of manipulative legal and social maneuvering places many other minority populations at risk for legalized discrimination as well. A summary of empowering steps forms a galvanizing takeaway for readers interested in making a difference. Though a tad vainglorious in spots, the thrust of Signorile’s urgent message is cogent and heartfelt, creating an essential reminder to the LGBT community to continue pressing forward toward the ultimate goal of “full civil rights and true equality.”