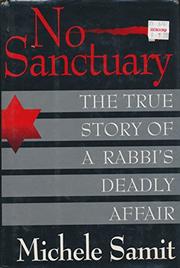 The True Story of a Rabbi's Deadly Affair

Compelling first book by a California journalist (and two-time Emmy winner) who writes about the murder of a friend in their San Fernando Valley community. The story has two pivots and a missing piece. It presents itself as a reluctant exposÇ of the wealthy Jewish temple to which those involved in the murder gave their loyalty. And it has a missing gunman, plus threats and physical attacks against the author (her nose has been broken twice). The pivots are Anita Green, shot fatally in the back of her head by a hit-man motorcyclist as she parked her car at her husband's office; and her husband, Melvin, a rich accountant who stood trial, was convicted on circumstantial evidence, and was given a life sentence without parole. Melvin is clearly a monster, sired by an apparent monster from whom he could find no escape, and when he became the same tyrant and control freak that his still-living father evidently is, there was no sanctuary in which he was safe from himself. So Melvin tried to control every item in his life, starting with the prenuptial contracts with Anita. Their marriage lasted ten years as Melvin ballooned up to 600 pounds and hid behind his obscenely hectoring motor-mouth and his body. At first, Anita was willing to be his slave, but as she grew powerful (as president of her temple), she fell into an affair with the temple's rabbi, a practiced seducer whose escapades were pointedly ignored by his big-money congregation. When Anita made clear that she was divorcing Melvin for the passionate rabbi, and Melvin knew that Anita knew about his fraudulent IRS returns, his sense of control was threatened from two sides and he hired a hit man. Or did he? No other explanation makes sense of the facts, but the hit man—whom Samit has identified to the police—is still out there. Intimate and conscientious reporting, well done.