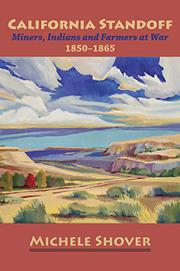 Shover (Exploring Chico’s Past and Other Essays, 2005, etc.), a former political science professor, examines the violent clashes in Northern California’s Butte and Tehama counties between Maidu bands and whites flooding into the area after the gold rush. Underlying the bloodshed was a dynamic of dispossession. White farmers excluded the Maidu from the Sierra Nevada foothills and Sacramento River Valley, denying them access to oak groves where they harvested their crop of acorns and forcing them to winter in the barren mountains. Meanwhile, white miners built dams in mountain streams, ruining the fishing the Maidu relied on. The Maidu responded with raids on white settlements to steal food, rustle cattle, burn houses, and, on occasion, murder families. Settlers retaliated tenfold with expeditions that led to massacres that killed hundreds of Maidu over the years, many of them innocent of any offense, culminating in forced removals to reservations under appalling conditions in which numerous people died of hunger and disease. Within this broader narrative of racial strife, the author paints a fine-grained, engrossing portrait of a more complex reality of mixed motives and shifting alliances. Different Maidu “tribelets” fought one another, with Mountain Maidu attacking Valley Maidu, who worked peacefully on white ranches and fought alongside settlers (and sometimes betrayed them). White miners, some of whom had children with Native American women, often collaborated with the Maidu and opposed farmers’ retaliation. At the center of the action is the ambiguous figure of John Bidwell, a land baron who sheltered Maidu and opposed their transfer to reservations—mainly because he wanted their cheap labor for his operations. There is enough real-life drama in this sprawling saga for a half-dozen anti-Westerns, with brutal violence on all sides, economic exploitation, political chicanery, treachery, and persistent uncertainty about who was a friend or enemy among suspicious factions who barely understood one another. The absorbing account reads as a more evenly matched contest than might be supposed. Compensating for their lack of numbers and modern weapons, the warlike Maidu deployed superb guerrilla tactics, running circles around settler posses blundering through their rugged canyons—until dedicated white trackers learned their methods and caught up with them in their mountain redoubts. Drawing on a wealth of documentary sources along with Native American oral histories, Shover provides a well-researched, intricate, and nuanced account of the kaleidoscopic conflict. She teases out the niceties of who killed whom and why, prunes exaggerations and misinterpretations of previous historians, and is cleareyed but fair in her judgments. At times, her narrative is confusingly crosscut and fragmented, and her prose, while lucid and brisk, is somewhat dry and academic; it can seem a bit flat for the events described. (Bidwell’s associate Harmon Good “made prisoners of a small” Native American “child and its mother whom…he intended to deliver to Bidwell’s rancheria. However, when the woman refused to go with them, one of the men killed her, so they took the child.”) Still, this is a fine addition to the scholarly literature on this epic of frontier injustice.

A richly informative investigation of a tragic episode.