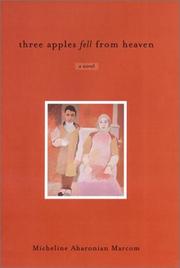 First novel by a northern California–based writer chronicles the terrible plight of Armenians, including her own family, during the genocide war carried out by the Turks during WWI.

Between 1915–16, about a million and a half Armenians were murdered by Turkish forces as part of a ruthless campaign of what today might be called “ethnic cleansing.” The first genocide of the 20th century, the killing of the Armenians is clearly an antecedent to both the Holocaust and the brutal doings in the former Yugoslavia, with particular resonance for students of the latter. Like the events in Bosnia, Croatia and Serbia, the events in Anatolia pitted people who had once been neighbors, customers, and friends against one another in ethnic violence with a religious underpinning. Surprisingly, there has been very little fiction written about this terrible historical event. Marcom’s is the rare exception, and at its best it captures with coruscating force the intimate nature of a genocide committed by the people who used to live next to you. She has chosen an unusual structure, a tapestry of many vignettes that depict a shattered Armenian culture and way of life through the memories of victims and bystanders, those who hid, those who died, and those who tried vainly to help. Woven into this complicated structure are some recurring characters, chief among them Anaguil, a young girl who has watched her father and other men jailed and tortured; Sargis, a young would-be writer who, disguised as a woman, lives in near-total darkness in an attic. Leslie Davis, the American consul who reports truthfully on what he has seen but who still emerges as a supercilious and oversexed fool.

Marcom writes unflinchingly about grotesque violence and the gritty nastiness of bodily functions, but too often lapses into a stilted diction that is more ponderous than exotic. Still, her story has a certain brutal force that stays in the memory.