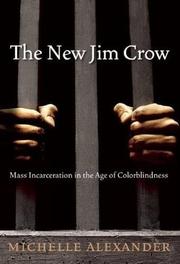 Mass Incarceration in the Age of Colorblindness

A civil-rights lawyer’s disturbing view of why young black men make up the majority of the more than two million people now in America’s prisons.

In this explosive debut, Alexander (Law/Moritz College of Law and the Kirwan Institute for the Study of Race and Ethnicity) argues that the imprisonment of unusually large numbers of young blacks and Latinos—most harshly sentenced for possession or sale of illegal drugs, mainly marijuana—constitutes “a stunningly comprehensive and well-designed system of racialized social control.” The “warehousing” of inner-city youths, she writes, is a new form of Jim Crow under which drug offenders—in jail or prison, on probation or parole—are denied employment, housing, education and public benefits; face a lifetime of shame; and rarely successfully integrate into mainstream society. The author blames the situation mainly on the War on Drugs, begun by Ronald Reagan in 1982, which grew out of demands for “law and order” that were actually a racially coded backlash to the civil-rights movement. The situation continues because of racial indifference, not racial bias, she writes. Many will dismiss the author’s assertions; others will find her observations persuasive enough to give pause. Most people who use or sell illegal drugs are white, but in many states 90 percent of those admitted to prison for drug offenses are black or Latino. Police departments, given financial incentives—cash grants and the right to keep confiscated cash and assets from drug raids—to focus on drug enforcement, find it easier to send SWAT teams into poor neighborhoods, where they will face less political backlash, than into gated communities and college frat houses. Also, most people do not care what happens to drug criminals, feeling that “they get what they deserve.” So what’s to be done? Alexander writes that civil-rights leaders, reluctant to advocate for criminals, remain quiet on the issue; President Obama, an admitted former user of illegal drugs, is not in a position to offer leadership; and policymakers offer only piecemeal reforms. She hopes a new grassroots movement will foster frank discussion about race, cultivate an ethic of compassion for all and end the drug war and mass incarceration.