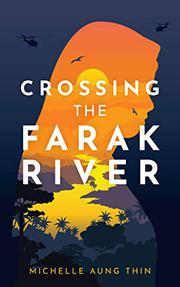 When helicopters of the Sit Tat, Myanmar’s army, arrive in their northern Rakhine province town, 14-year-old Hasina fears for her family and their Rohingya Muslim community.

State broadcasts depict the Rohingya as “Chittagonian Bengali Muslims,” foreign terrorists, and attempt to pit Buddhist and Muslim neighbors against one another. When the Arakan Rohingya Salvation Army clashes with the Sit Tat, the latter immediately retaliates with violence, burning Rohingya homes. Hasina, her 6-year-old brother, and her 13-year-old cousin, flee into the forest, her father charging Hasina to keep them all safe and promising to come for them. But after days in the forest avoiding soldiers, the children make their way back only to find the adults gone, possibly rounded up. As Hasina desperately seeks to learn where the adults have been taken or if they are even alive, she must also figure out how the children can survive and stay safe even as people try to exploit them—or worse. In this novel, Burmese Australian author Aung Thin introduces young readers to the plight of the Rohingya, alluding to the horrors and violence of targeted persecution while also addressing how decades of authoritarian and military rule have affected the entirety of the country. An abrupt ending jars readers but emphasizes that for children in conflict zones, safety is elusive. Characters are Rohingya, Mro, and Burmese; Islamic terms are localized to both Rohingya language and context.