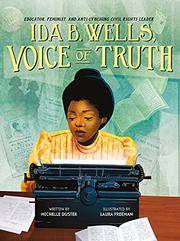 IDA B. WELLS, VOICE OF TRUTH

Author Duster introduces the book’s subject in the form of an illustrated family photo album, explaining that Wells was her great-grandmother. Duster chronicles the major events in Wells’ life, beginning with her birth into slavery in 1862 and ending with her death in 1931. At the age of 16, Wells’ parents died, leaving her to care for five younger siblings. She became a teacher, began to write about social and political issues of the time, and stood up for social justice. In 1892, the lynching of three of Wells’ friends further stoked the fire in her belly. Her writing grew bolder, and she began to speak out publicly against racial discrimination, gender inequality, and lynching at the cost of her livelihood and personal safety. The text incorporates a few details about Wells’ personal life and includes an overview of her professional accomplishments—her work with the suffrage movement, co-founding of the NAACP, and creation of the Negro Fellowship League. Freeman’s trademark multitextured digital art emotionalizes the matter-of-fact text. Photographs and pamphlets written by Wells appear in the artwork as illustrated facsimiles. The story is bookended by striking double spreads displaying stirring quotes attributed to Wells in enormous hand lettering. (This book was reviewed digitally.)

A straightforward biography that pays tribute to an impressive and courageous life.