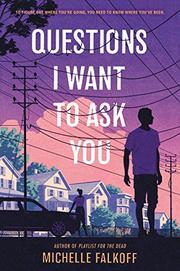 QUESTIONS I WANT TO ASK YOU

Searching for the mother he knew nothing about changes a young man’s life.

Patrick Walsh’s nickname “Pack” was originally a nasty insult given to him when he was overweight. But after years of hardcore CrossFit and a rigid adherence to the paleo diet, the white 18-year-old is in great shape and looking forward to a summer spent with his girlfriend, Maddie, who is also white. Pack thinks they’re going to be together forever, even with Maddie going to University of Massachusetts in the fall while Pack stays home with his cop father. A few days before graduation, Pack receives a letter from his mother—a woman he believed was dead. As he slowly works to solve this mystery, Pack discovers that the plans he’s made aren’t necessarily the only right ones for him: Maybe one bite of cake won’t make him fat again; maybe he’s cut out for college after all; maybe he won’t be with Maddie forever. Pack’s slow maturation is handled well, albeit with stilted exposition. The crime element of the story is underdeveloped, and the resolution that explains his mother’s absence is clunky. These shortcomings are easily forgiven, however, given the novel’s strong character development.

A well-rounded, much-needed portrait of a boy with self-image issues and a narrow mindset who expands his viewpoint and prepares for an uncertain future.