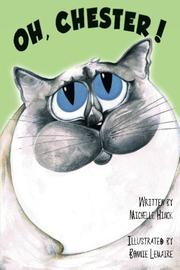 A pampered cat narrates his tale of woe when a new baby joins the family.

Hinck (Great Love: The Mary Jo Copeland Story, 2013) nails Chester’s voice from the start. “Hi, everyone! It’s me, Chester. I know what you’re thinking: Wow, that is one handsome cat!” Lemaire’s cat-centric illustrations radiate Chester’s attitude and range of emotions. When Mom, whose head is out of the frame, rubs his belly, he’s shown lolling back with eyes half closed. Chester’s description of his perfect “before” life goes on too long, though the self-absorbed tend to do that. When Mom and Dad announce they are leaving and Grandma is coming, Chester grows uneasy: The text reads, “ ‘I object!’ I said. I flattened my ears out so they would know that I was serious,” while Chester’s speech balloon simply says, “Meow!” Using cats’ actual body language to describe Chester’s feelings is an inspired choice; kids will relate to the jealousy big siblings often feel, and they’ll also learn to read their pets’ signals. Eventually, the parents return home with a “package” Chester believes is a gift to make it up to him—until out comes a “screaming, screeching, bouncing, banging creature! The baby, they called it.” The family is so enamored, “it was like I didn’t even exist. You can imagine the horror.” The indignities build until the family points out that the baby loves Chester, too. “If having my fur pulled out by the roots is love, then I am going to need a lot of therapy.” Just as Chester thumps his tail in protest, the baby giggles, and Chester learns that the baby will fall asleep when he snuggles up and purrs. This gives the rest of the family time to pay attention to Chester, an outcome he finds supremely pleasing: “I win!” School-age siblings will appreciate the wry humor in Chester’s snappy remarks—“No one ever cheers when I poop”—while his discovery that his interactions with the baby can have positive effects may encourage big brothers and sisters to make similar discoveries of their own.

Dealing with sibling rivalry may be a common picture-book theme, but this book’s droll and amusing approach is a welcome addition to the genre.