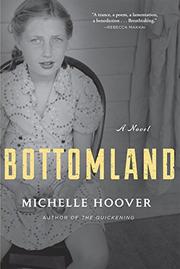 The voices emerging from a brooding farmhouse in early-20th-century Iowa reveal its residents' secrets and desires—some expected, some less so.

Through the faceted first-person accounts of four siblings and their father, Hoover (The Quickening, 2010, etc.) delivers a lyrical, at times mysterious, and dreamy tale of family ties. Its focus is several generations of the Hess clan, headed by Jon Julius, who emigrated from Germany to the United States in 1892, staking 150 acres of Midwestern bottomland as a homestead for his wife and the six children they would have. Some 20 years later, the Hess family may seem rooted, but the demands of survival on the land are relentless, and their isolation is intensified by a dispute with neighbors, a crippling accident, and the anti-German sentiment arising from World War I. Yet Hoover’s tale is about more than the Hess' hardscrabble rural existence, moving as it does from wide open fields to the grime and toil of urban factories and overseas to the blasted wastes of Europe, all the while exploring the psychologies and complicated, sometimes unreliable, and unexpected bonds among the siblings. When two of the sisters, Esther and Myrle, disappear from the farmhouse one night, the notion of home is cracked wide open, never to be restored. Lee, the son who went to war and returned traumatized, sets off for Chicago to search for the girls but eventually returns without them. Esther’s and then Myrle’s accounts follow, overlapping yet divergent, while Hoover plays a sly hand of revelation, leaving the truth about how and why the girls escaped to emerge late and plangently.