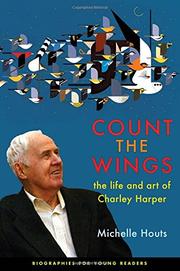 The Life and Art of Charley Harper

Portrait of an artist and illustrator whose work is more recognizable than his name.

Best known for angular, geometric images of birds, insects, and other wildlife, Harper, who died in 2007, spent most of his career in Cincinnati, where, along with illustrating several children’s books—notably The Giant Golden Book of Biology (1961)—he did magazine work and created murals for local buildings. Taking the 2015 restoration of one such mural, an abstract composition called Space Walk that had been hidden a quarter century before behind a renovation, as her starting point, Houts makes thoroughly cited use of published works as well as interviews and family archives to look back over her subject’s small-town childhood, his military service, art training (which began with a correspondence course in cartooning), and the development of his style from competent but ordinary realism to a livelier, more distinctive look he called “minimal realism.” That development can be easily traced in the sketches and color illustrations that, along with family snapshots and views of letters and other documents, make up the generous visuals. The author doesn’t venture to discuss the white artist’s children’s books in detail or his influence on other illustrators but does convey a clear sense of his amiable character.

Larger collections of Harper’s art are available, but this warm tribute offers a look behind the paint box.