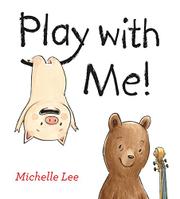 Two friends with different ideas of fun find a way to play together.

A little pig named Pip tries in vain to interest Nico the bear in playing with toys. Nico agrees to play—the cello. Pip tries to entice Nico with a wagon full of stories and lots of ideas for games, from dressing up like heroes to playing dolls, but Nico declines each one. Lots of white space and a playful typeface set the stage for the possibility of Nico’s coming around, but Pip just becomes more and more frustrated as Nico serenely makes music. Pip finally gets Nico’s attention by hollering, “I meant play with me!!!” Young children will relate to Pip’s exuberance and exasperation while also appreciating that sometimes you just want to do your own thing. Lee’s ink-and-watercolor illustrations capture the emotions of each character—Nico’s joy of music and patience toward Pip, whose tail even looks despondent as it seems more and more likely that they won’t be playing together. Playful touches—Nico knocks over Pip’s block tower with the bow; Pip uses the scroll of Nico’s cello to tie one end of a jump rope. This first picture book by author and illustrator Lee gives lots of room for children to fill in the gaps with their own imaginations.

A nice, gentle reminder that it takes two to make a friendship work