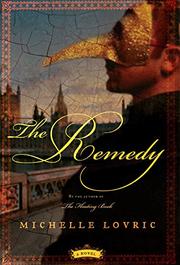 Lovric’s second historical novel (The Floating Book, 2004) travels between London and Venice to follow a Venetian actress’s unconventional romance with a British entrepreneur/criminal in the late 1700s.

The nuns at the convent where her patrician parents have placed her turn a blind eye when 15-year-old Catarina Venier carries on an affair with an Englishman outside the convent gates, but then she gets pregnant, her lover abandons her and the baby dies in childbirth. After hot-tempered Catarina attacks a nun, she is declared legally dead. Actually, she is forced to spy for the Inquisitors of Venice while assuming a new identity as the actress Mimosina Dolcezza. While performing in London, Mimosina begins a love affair with a theater patron, Valentine Greatrakes. She believes that through marriage to an Englishman of substance like Greatrakes, she can escape her Venetian enslavement to the Inquisitors. She thinks she has only one obstacle: Greatrakes’s devotion to Pevenche, the bratty daughter of his recently murdered best friend Tom. Actually, Greatrakes is a violent charlatan and member of the London underworld who woos Mimosina under the mistaken assumption that she lacks guile. Each lover’s secret and the tricks each performs to ensnare the other often work against the affair. The Inquisitors order Mimosina back to Venice. Unaware that Valentine has followed, she escapes in a gondola and returns to London where, working for a con artist, she learns Valentine’s real station in life.

Despite the merciless plot twists, Lovric’s real fascination is with the cities she describes in loving if endless detail.