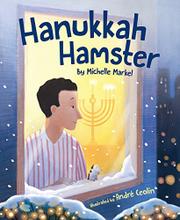 A new friendship born during the holiday season tugs on the heartstrings.

December can be a hard month for those far away from their families. Edgar is a city cabbie kept busy driving passengers from one store to the next. After a nap in his back seat he discovers one more passenger: a hamster. He dutifully reports the lost animal to his company and then takes it home and gives it a very cozy hamster habitat. All this occurs during Hanukkah as Edgar lights the candles on his menorah each evening. Chickpea, as he names the little guy, gets his smiling face snapped with Edgar’s phone and transmitted to Tel Aviv, where Edgar’s family lives. The two new friends are very happy together. But then, when dropping a passenger off, he recognizes a fare from the evening he found Chickpea, a woman who’s standing in front of her house with her son, and she confirms that Chickpea was hers, bought that day for her classroom. It is December, the season for gift-giving, though, and the ending of the story will surely touch every reader’s heart. Softly textured illustrations depict a brightly lit city, a menorah shining in the window, and a hamster that children (and adults) will want to pick up and cuddle. Jewish Edgar presents white and the mother and her son, black.