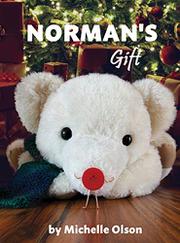 The most charming button in picture books returns for a “Gift of the Magi”–style Christmas tale in this sequel.

Norman the Button is happy with his new life as a nose for Freddy Teddy. The two are inseparable—that is, until bedtime. The stuffed bear’s awful snoring keeps Norman up at night, so he sleeps on his own in a dollhouse. One night, Norman overhears Freddy telling the rest of the toys that he has the perfect Christmas present for his close friend. Norman frantically tries to come up with a terrific gift for Freddy, but a car proves too expensive, a cellphone on sale turns out to be worthless, and the cake the button attempts to bake—complete with raw bacon and unbroken egg—is a disaster. Norman feels that the homemade present he finally concocts isn’t good enough for his pal. Luckily, Freddy truly appreciates Norman’s talents and loves his gift. Olson’s (Norman, 2018) signature puns (jokes the two friends read together put Norman “in stitches”; the snacks they share make Freddy “stuffed”) are fewer than in the first volume. But Norman’s misadventures help him learn to value his own talents and deftly reinforce the themes of the original story. The author’s posed photographs with digitally illustrated details are gloriously silly and sure to give adults giggles alongside their children.

The message that real friends value their pals most for being themselves couldn’t be delivered by a cuter button.