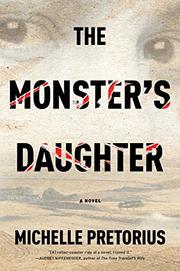 A young police officer in modern South Africa investigates a murder with deep roots in the past in Pretorius’ debut mystery.

The daughter of a prominent policeman, Alet Berg finds her promising career in the Special Task Force cut short when she gets involved with another officer; humiliated, she's sent to Unie, a quiet rural town, to serve as a traffic cop. When a burned body is found on a local farm, however, Alet quickly discovers that the crime has connections to episodes of racial violence during apartheid, and then realizes that the links to the past are even deeper and more disturbing than she could have imagined. As she investigates, she must confront her father’s secrets as well as her own misconceptions as she learns to work with a local police sergeant. Chapters set in 2010 are interspersed with chapters focused on two children who are the only living results of horrific genetic experiments conducted during the Boer War in 1901. As the past and present draw closer together, so do the interlocking stories and characters. Pretorius makes a deliberate effort to tie many major historical events directly into the lives of her characters, but this actually lessens the novel’s impact. Covering a century’s worth of conflict, racism, and reconciliation happens at the expense of the mystery and of deep character development. The theme of buried secrets impacts both the personal stories and the historical context, but in the end, there is simply too much going on. Perhaps this is a larger point, deliberate or not, about the necessity and challenge of writing about 20th-century South Africa.

A promising effort that gets buried under the weight of the past.