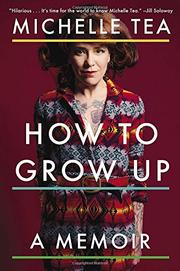 HOW TO GROW UP

A memoir about how sobriety helped a recovering alcoholic belatedly become an adult.

Title aside, this isn’t a how-to book but more of a cautionary tale. As Tea (Valencia, 2008, etc.) writes, “I am someone whose path to adulthood is not a clear A to B, a straight line through life. My life is more like A, B, back to A, but it’s a different A this time, and now B looks so different from my time back at A—and whoa, here’s C, what a trip! I’m a grown-up!” It’s a life that has encompassed marriage to a woman after a life of often passionate, frequently misguided relationships with much younger men; of finding a place of her own after living in party houses; of teaching writing in college though she never graduated; of earning a living through writing and speaking that she once did almost for free. And of prostitution, phone sex, meth and heroin—though she treads lightly in this book on those areas. She writes, as she says, with “the dark domestic humor of a satanic Erma Bombeck,” and this is thematic territory that others have explored before her. As the memoir plays chronological hopscotch, some chapters might have fared better as stand-alone essays (particularly “How to Break Up,” which comes after she has settled down, married and her breakups are presumably behind her), and some of the concepts seem a little forced (“Hail the breakover, a breakup-inspired makeover”), but generally, the personality of her writing carries readers through. There’s also an inspirational quality to the way a life that once seemed so wayward (even to the author) has worked out so well.

An engaging and often darkly funny memoir. Life begins at 40 for the author, who got a late start on adulthood and had a wild time getting there.