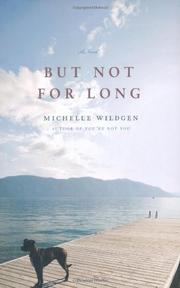 BUT NOT FOR LONG

Wildgen (You’re Not You, 2006) follows three residents of a Wisconsin sustainable-foods co-op during a blackout.

Greta, a fundraiser for Grinwall College, doesn’t seem like the cooperative-living type, but housemates Karin and Hal accept her, even though she doesn’t cook by the house rules: from scratch with locally grown, organic ingredients. Fit, earthy Karin becomes something of a celebrity in Madison when she rescues a dog mysteriously adrift on Lake Monona. Meanwhile ex-hunter-turned-vegetarian (and closet meat-eater) Hal, who works delivering meals to shut-ins, wallows in worries: his inability to feed his customers as food supplies run short during the blackout, his uneasiness about his widower father’s recent move to a cabin in the woods. To compensate, Hal lavishes attention on needy people. When he overstays his time with Mrs. Bryant, an eccentric elderly woman on his delivery route, it almost costs him his job. He then turns to Greta’s estranged alcoholic husband Will, who passes out on their porch the first night of the blackout. Flooding in distant cities, rising fuel prices, student unrest, bizarre SWAT and military maneuvers, divers searching the lake for a body and a dearth of information on the cause of the extended blackout (which strains believability) contribute to a sense of impending doom. The characters’ impulses to seek out the root causes of these environmental, infrastructural and personal crises go unrealized—which might be the point, or rather nonpoint of Wildgen’s portrait of a Slacker-meets-Gen-X crowd and their wanderings. Everything seems to be moving toward an epiphany that never quite arrives—Karin, for example, realizes that her investment in cooperative living provides no guarantees for the future in an unstable world—and frequent digressions into irrelevant back story further mar the narrative flow. The inevitable love triangle and resultant jealousies, the inconveniences and hazards of a blackout, excursions into drugs and alternative lifestyles—none of it ever manages to gain traction.