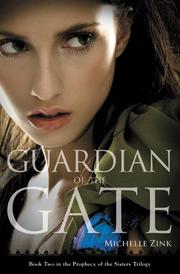 GUARDIAN OF THE GATE

From the Prophecy of the Sisters series, volume 2

In this sequel to the Victorian fantasy Prophecy of the Sisters (2009), Lia is resigned to a life spent as a pawn of prophecy, fighting the apocalyptic mission of her sister Alice and the demonic Samael. It’s time for Lia and her dearest friends to travel to Altus, the home of the magical Sisters and of the Grigori, who protect the Otherworlds. There she hopes to find the mystical artifact required to advance her preordained adventure onto the next stage. Though the pacing is forced, with a quest moved along more by the requirements of narrative than by any natural evolution, Lia’s journey takes her through many of the stepping stones of a good gothic adventure. There’s betrayal by a loved one, the introduction of a mysterious and attractive young man, the inopportune death of a mentor, even a chase scene through the French countryside. Often-florid Victorian language, though appropriate for the story’s mood, occasionally crosses the line from evocative to ridiculous (“Checkmate, I think. At least for now”). Dramatic set dressing, if little emotional resonance. (Fantasy. 12-14)