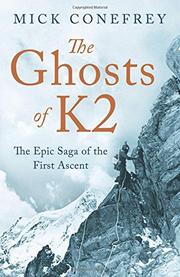 THE GHOSTS OF K2

The Epic Saga of the First Ascent

Chronicling the superhuman efforts to climb, though never conquer, the “Savage Mountain.”

Mount Everest may be the tallest and most famous mountain on Earth, but for real alpinists, K2, the world’s second-tallest peak, is by far the more daunting to climb. Some 800 feet shorter than Everest, K2 makes up the difference with ruthless weather, treacherous terrain, and an isolation that makes even approaching its base a challenge. Conefrey (Everest 1953: The Epic Story of the First Ascent of Everest, 2014, etc.) ably tells the story of the many attempts by hardy souls (and outsized characters) to reach the peak of this most formidable mountain. On July 31, 1954, more than a year after the first ascent of Everest, two Italians reached the summit of K2 against all odds. Achille Compagnoni and Lino Lacedelli were part of a far larger team whose work finally achieved what many thought would never be possible. However, the fleeting joy of accomplishment gave way to controversies and recriminations, elements that the author also revisits and deconstructs. Conefrey writes skillfully about mountaineering, and he knows its history and its many players, stars and bit actors alike. He successfully conveys the complexity and obstacles that these brave men faced. Occasionally, the different efforts to scale K2 take on a subtle repetition, and the book would benefit from both a glossary and an annotated cast of characters. But Conefrey makes the stakes clear and reveals the many rivalries and tensions that plagued even the best-equipped teams. In the epilogue, the author explores some of the lingering debates about the successful 1954 ascension.

Most of us will never experience K2. Conefrey leaves readers with both tremendous admiration for and an appreciation of the consequences for those who succeed in an adventure so physically, mentally, and emotionally taxing.