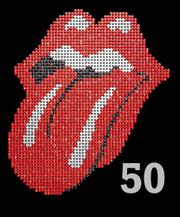 At the half-century mark, the “World’s Greatest Rock ’n’ Roll Band” unambitiously recounts its own story in pictures.

A commemorative project devoted to 50 years of the Rolling Stones faces some immediate problems, since the band, in emulation of the Beatles’ great multimedia success with Anthology, already took a look backward in According to the Rolling Stones (2003). That previous authorized work surveyed the Stones’ lives and careers with a minimum of candor and a wealth of illustrations. The present anniversary-year tome is a straight-up-the-middle picture book. After four short introductory essays by founding members Jagger, Richards and Watts, and longtime guitarist Wood, the collection becomes a photographic march down Memory Lane. Many of the shots will be familiar to Stones fans and to owners of the earlier book (and former bassist Bill Wyman’s colorful history, Rolling With the Stones); some of the short quotes that accompany the stills have been lifted directly from the 2003 work. With so little context supplied by the authors or their editors, readers are on their own. Anyone with knowledge of the group’s history or mythos will wind up filling in the blanks: “Say, isn’t that Mick’s ex-wife Bianca there? Is that saxophonist Bobby Keys?” Since the focus is almost exclusively on the band’s onstage life, the book works best as a pictorial reflection of the Stones’ status as a touring attraction of nearly unequaled massiveness. Ultimately, the book is little more than a visual keepsake for obsessive fans, some of whom will already own the revealing high-end picture books by such gifted Stones shutter men as Dominique Tarlé and Ethan Russell. As histories go, the book takes a distant back seat to such essential books as Richards’ bestselling Life (2010) and Stanley Booth’s still-revelatory work of fly-on-the-wall reporting, The True Adventures of the Rolling Stones (1985).

A soulless corporate birthday party that sheds no new light on its well-traveled subjects.