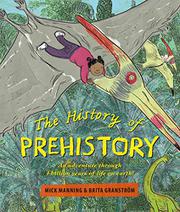 THE HISTORY OF PREHISTORY

A quick tour through our planet’s past, from the aptly named Hadean Eon to the invention of writing.

With a cheery reassurance that their facts are “bang up-to-date and checked by experts!” two young tour guides—one light skinned, one dark—begin by ushering readers past Earth’s fiery beginnings (“Monstrous volcanoes spew out lava”). The earliest signs of life and the age of dinosaurs give way to Australopithecus afarensis “Lucy,” Homo sapiens, the appearance of cave paintings 40,000 years ago, and so on to stone tools, farming, and, finally, 4,000-year-old hymns ascribed to the first identified author, a Sumerian priestess named En-hedu-anna. For all their claims, the veteran collaborators (Books! Books! Books!, 2017, etc.) do slip up occasionally, repeatedly noting for instance, that pterosaurs are flying reptiles and not dinosaurs but neglecting to explain the difference and by understating the currently theorized age of the oldest cave art by over 20,000 years. Still, in their cartoon illustrations they bring young time tourists face to face with now-vanished creatures, several types of prehuman ancestors, a (light-skinned, female) cave artist, and En-hedu-anna, dressed in elaborate regalia and digging away on a clay tablet. And, just for fun, a timeline designed as a board game at the end offers a painless review of the passing eras.