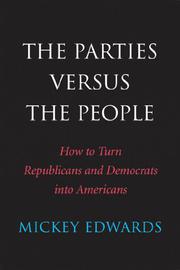 THE PARTIES VERSUS THE PEOPLE

How to Turn Republicans and Democrats into Americans

A 16-year veteran of Congress examines why political partisanship has become so dysfunctional.

Aspen Institute vice president Edwards charges that the political parties are private clubs that control the primary process, the electoral districting and the national political agenda. Believing that they “cannot be allowed to control our politics,” he presents a series of proposals intended to transform the processes of elections and governing. Edwards argues from his own experience that the political system is working exactly as it has been designed to work, as a vehicle for party advantage, intransigence and a constant battle for domination. The author documents how partisanship has increased since the 1980s and how gaming the electoral process through primaries has shifted power to the extremes of both parties, narrowing effective electoral choice. In the ’90s, Newt Gingrich arrogated more power to the office of speaker of the House, taking over committee appointments, setting the legislative agenda and dispensing other patronage on the basis of his own definition of party loyalty. Some of Edwards’ corrective measures include taking control of elections away from the parties by opening up primaries to all comers and ending gerrymandering. He also wants to ensure that political campaigns are paid for by people, not corporations, while reducing the need for massive money outlays. Our current system, he writes, “is ordained by neither the Constitution nor common sense.”

A spirited, well-constructed argument for reform that does not shy away from comprehensive solutions.