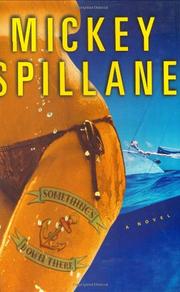 What a difference a half-century makes. The legendary hard-boiled master’s latest seafaring adventure, less Mike Hammer than Ernest Hemingway, packs all the wallop of a newborn kitten.

Mako Hooker calls himself a fisherman, and has a nifty boat, the Clamdip, and a Caribe captain, Billy Bright, to prove it. But the hush-hush government agency he retired from after a lethally successful career calls him an invaluable local resource when a series of vessels in the Bermuda Triangle fall prey to attacks by unknown causes. Could the boats be running into unexploded American bombs laid years ago? Or are the gouges in their hulls evidence of something with . . . teeth? When the Company sends down a crew under Mako’s ex-colleague Chana Sterling to coordinate with Mako, there’s a brief flare-up of Hammer’s unregenerate voice (“for a second he wished he had been packing his .45 . . . so he could turn and shoot her guts right out of her beautiful body and it would finally be over with for all time”) that’s so anachronistic it’s like seeing a prehistoric fish break the surface. Soon thereafter, though, the tale gets becalmed in criminal conspiracies that go nowhere (courtesy of smooth Hollywood producer Anthony Pell, formerly mobster Tony Pallatzo), a romance with Hollywood heiress Judy Durant that goes nowhere surprising, and a series of portentous hints about the mako shark that’s following the Clamdip into dangerous waters because it sees itself, not unnaturally, as Mako’s twin. It all ends with an unforgivably muffled finale that will leave an awful lot of readers wondering just what was down there.

If Hammer’s last case, Black Alley (1996), was an exercise in shamus nostalgia, this yarn regresses even further to the Boy’s Own Adventure period, complete with the girl in the pink bikini the hero wouldn’t dream of seducing.