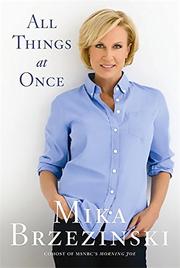 ALL THINGS AT ONCE

by Mika Brzezinski with Daniel Paisner

The MSNBC personality writes about her roller-coaster career in TV news.

Since 2007, Brzezinski has gained notoriety as Joe Scarborough’s moderate sidekick on Morning Joe, but her defining moment as a journalist came, ironically, during June that year, when Paris Hilton was released from jail. Asked repeatedly to deliver that bit of infotainment as the lead headline, Brzezinski refused and promptly hopped off her anchor’s chair and shredded the story. How she reached the point of such gutsy on-air defiance is the main subject of her memoir. “My one abiding thought,” she writes, “was, Look, I’m forty years old, and I’ve been doing this a long time, and I can’t pretend that this is news…I thought, You know what? Fire me. Go ahead. Like I’m scared of that happening again. And underneath that thought was another: This feels good.” The youngest of three siblings, Brzezinski grew up in the charmed shadow of her famous parents, Zbigniew Brzezinski, National Security Advisor to Jimmy Carter, and Emilie Benes Brzezinski, an accomplished sculptor. Though the author says that her familial role was often that of “keeping the conversation going,” an important early lesson she learned from her mother and grandmother was that she could accomplish anything. Her ambition set her on the road to a major anchoring job, finding the right husband and raising children. Along the way, when she rose to the top at CBS News only to be fired and end up unemployed for more than a year, Brzezinski says the lesson she has gleaned is “pace yourself.” While the author seeks to advise women on negotiating the charged family-career divide, the most memorable moments are those in which Brzezinski simply tells her story, displaying her struggles and achievements as a journalist, wife and mother.

An intriguing account sure to interest working women and news junkies alike.