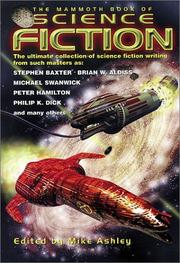 THE MAMMOTH BOOK OF SCIENCE FICTION

Let other anthologists package the award-winners, the classics or stories clinging to a critical theme. What makes the Mammoth series interesting is editor Ashley's penchant for including stories that have come and gone without arousing much attention, or that deserve a second look for the light they shed on the genre as a whole. Ashley's Connie Willis's Hugo-winning time-travel tale, “Firewatch,” drops a 21st-century historian into the WWII London blitz. This resonates beautifully with Kim Stanley Robinson's “Vinland the Dream,” in which a mere discussion of the meaning of history changes the perceptions of archaeologists exposing a century-old hoax. “A Death in the House, a sentimental pastoral alien visitation story by Clifford Simak reflects ironically on the two original alien encounter stories, Eric Brown's “Ulla, Ulla,” a postmodern glance backward on H.G. Wells's War of the Worlds, and Stephen Baxter's “Refugium,” a Malenfant family adventure in which unseen aliens create a cosmic refuge for intelligent life. Not all the selections work so well. When compared with “A Ticket to Tranai,” Robert Sheckley's tiresome dystopian farce, Philip K. Dick's “The Exit Door Leads In,” an absurdist take on a far-future college education (originally published in the Rolling Stone College Papers), seems a slap-dash exercise in campy surrealism. Among the oldies that haven't aged well: “Shards,” Brian Aldiss's heavy-handed 1962 flirtation with stylized prose that anticipated the New Wave of the 1970s. Obscurantists will enjoy Frank Lillie Pollock's end-of-it-all account in “Finis” and Mark Clifton's unabashedly despairing “What Have I Done?”

Mammoth Book of Somewhat Obscure Stories by Writers Who Are Famous for Other Works, or Who Are Not as Celebrated As The Editor Thinks They Should Be.